Behind the Screen: The Final Confrontation

Putting together the layout for the players' conflict with the skeletal samurai was both relatively easy, and incredibly satisfying. It was the first time I had the chance to use many of the props I'd been prepping to give the players the tactile treasure experience I'd been looking for.

The Brinestump Caverns map was a simple cave system and the Cavern Tunnel Tiles packs from Christopher West werw perfect. As I've mentioned, I'm a big believer in putting the heart of a module's map on the table without getting caught up in the specifics; your players won't know the difference as long as the encounters are interesting and the layout keeps them focused on the action.

For the caverns, I needed a few key features: an entrance, a place for a giant spider to live, a large cavern and an alcove near the back of the complex. I also needed several water features. Outside of these core features, I was free to make the encounter as complex or simple as I needed to keep the action and tension high. 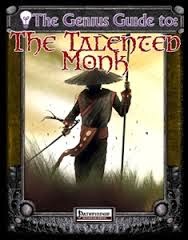 "Whether your passion is the classic unarmed mystic, the non-mystic martial artist, the armored sohei, the zen meditative archer, or something entirely different, The Talented Monk gives you the building blocks to create the monk of your imagination."

As with most gamers, there are a handful of classes that speak to me. The first character I ever created was a half-elf ranger way back in 1st edition. In 2nd edition I started playing with the ranger-druid multiclass. v3.* and Pathfinder re-envisioned the rangers and druids like I always pictured them--highly skilled and agile wilderness warriors and shapeshifting masters of animals, respectively. As much as the nature-based classes have ruled my roleplaying career there's been one other class that fascinates me, one that I always consider playing but rarely do. The monk. 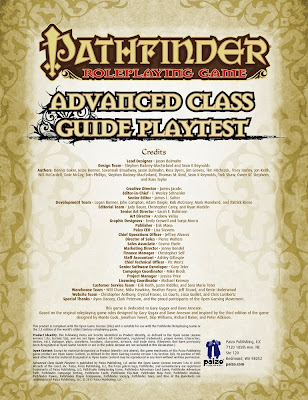 "I'm surprised by how much I enjoy these new classes. Each appears to balance roleplaying and combat effectiveness and is unique enough to inspire ideas for characters I'd love to see on the table."

This week, Paizo released a playtest version of their upcoming Advanced Class Guide. The playtest includes 20-level write-ups for 10 new classes, each a merger of two current classes. You can download your copy of the playtest here.

Behind the Screen: They Be Goblins

The Licktoad Village was built using Dungeon Tiles from Mage Knight Dungeons. The trees were all handmade by my friend Ty. The statue of Lamashtu and the watering holes were a part of the Mage Knight Dungeons sets. Chief Gutwad's enormous throne was painted by my friend Doug Easterly. The barrels and supplies in the storage room were painted by Will Gustwiller. The barricade pieces and folding base were bought from War Zone Gaming Terrain.

Behind the Screen: The Rusty Dragon Inn

Starting a campaign is a tricky thing. You need to hook the players, set the tone of your game, introduce the world, and people your setting with vibrant NPCs, while keeping the PCs the center of the story. Replace 'players' with readers, 'game' with novel, 'NPCs' with supporting characters, and 'PCs' with protagonists and you find yourself with the same challenges every modern writer faces when starting a new novel or short story. So why not borrow some tricks from the professionals?

I love teamwork on the table, but it's one of those things that the Pathfinder rules don't promote as much as I'd like.

A few years ago, BadAxe Games put out a supplement called Trailblazer. I recently discovered it while wandering down an internet hole that started at a post on the Pathfinder Google+ community. The folks at Bad Axe apparently had the same thought as I did because they created a great set of rules called Combat Reactions.

A combat reaction allows you to take certain actions even when it isn't your turn; attacks of opportunity are a classic example of a combat reaction. Trailblazer pulls actions like Aid Another into the same family as AoO, allowing characters to use their often-wasted AoO to promote teamwork on the field.

Around the same time I discovered Trailblazer, I read an intriguing post from gamer and blogger Brandes Stoddard at Harbinger of Doom on what he calls 'Giving Ground,' a technique that fits beautifully under the combat reaction umbrella.

I've adopted both of these ideas, tweaked them a bit and will be playtesting them in my Jade Regent game soon.

If you are threatening an opponent that is engaging an ally in melee combat, you can assist your ally as a combat reaction. Multiple allies can aid the same target. Aid ally combat reaction bonuses stack with each other, but not with other circumstance bonuses.

Last week on the Pathfinder Google Community, there was a conversation about party splitting. It started with a question like this:

"How do you handle nights when your party is splitting up to accomplish personal interests? Two players have business in one part of the city, another has a profession they are working on and a couple others have NPCs they want to visit. I feel like I am doing an OK job of giving everyone their own turn but, I'm curious how other GMs might handle this?"

Every GM runs into this at one point or another. Some GMs feel comfortable jumping from group to group, keeping the action moving, skipping die rolls and "going cinematic" in non-combat scenes, or running two fights on two different maps as if they're in the same room. Not every GM has honed those skills, and those who have don't always have the energy.

If you're party wants to split up, don't stress. Let the players do the work for you.