Behind the Screen: The Rusty Dragon Inn

Starting a campaign is a tricky thing. You need to hook the players, set the tone of your game, introduce the world, and people your setting with vibrant NPCs, while keeping the PCs the center of the story. Replace 'players' with readers, 'game' with novel, 'NPCs' with supporting characters, and 'PCs' with protagonists and you find yourself with the same challenges every modern writer faces when starting a new novel or short story. So why not borrow some tricks from the professionals?

Every scene in every story, whether novel, movie, or tale around the fire, should accomplish at least two of the following things:

Let's look at one of the worst movies of all time--M. Night's adaptation of Avatar, the Last Airbender (No, I won't link it. I'll do nothing to promote that insanity). In the beginning of the film, Katara and Sokka sit with their GranGran and ask her to tell them the history of their world. The scene is literally two kids sitting in front of a narrator telling a story to the audience*. You may have heard writers refer to this as "telling, not showing". This scene accomplishes #3 above (technically), while throwing both #1 and #2 under the bus. Now, to cleanse my pallet of the abomination that is Live Action Avatar, let's look at something tighter--The Matrix.

After overhearing a curious phone call discussing someone called "The One", we see this:

What does the first few minutes of this scene tell us?

1) Character: This strange woman is probably a hacker. She's a supernaturally skilled martial artist. She has allies. Skilled officers are no match for her, but she's terrified of these "agents".
2) Plot: We know she's after someone called "The One". How did the agents trace the call to her if her ally said it was a secure line? How does she have these supernatural powers and why do the agents seem to be even more inhuman? What does "they cut the hard line" mean? How will she get away?
3) Setting: The dark, rundown surroundings set the tone. Dystopian present. Oppressive government agents. The dark side of reality.

When you're creating an opening scene, find a way to engage character, plot, and setting. Immediately put your PCs in a physical, moral, and/or social dilemma they have to react to. If you can get all three in the same scene, even better. Have the NPCs and the setting set the tone. This helps if you have a campaign storyline in mind, but it can be done even if you're running a sandbox style game. Focusing the scene around one character helps to guide the action, but make sure to give the others a chance to shine.

For Jade Regent, I centered the action around Antax and The Rusty Dragon. The abuse of Antax at the hands of Harold Olver and his friends gave the PCs something to react to. It set up Paz as a smooth diplomat, Locke as a fascinated observer, Rillka as a well-known goblin hunter, and Antax as a reluctant combatant. It also gave Antax a chance to experience Ameiko's compassion which he'd established in his background (see #2 here).

Before games, I type up information about important NPCs, locations, events and rumors to give to the players at the beginning of the game, or even a game or two before if I have enough foresight. These summaries are quick, legible and easy to reference. My handwriting is terrible, so I print them on Avery Ink Jet Clean Edge business cards (Avery 8870). The small cards force me to be succinct, like the D&D Twitter.

Knowing the players would be seeking out Walthus Proudstump, and that knowledge of his personal habits and behavior would be key to solving a mystery, I gave the halfling scout in the group a personal connection to him. When Walthus acted like he'd never seen Rillka before, I didn't have to tell the player in front of the others, he figured out something was wrong on his own. When he acted on it, the others knew something was up without me being involved. If they wanted to know more, they could ask him directly. This is the gaming equivalent of "Show, don't Tell." 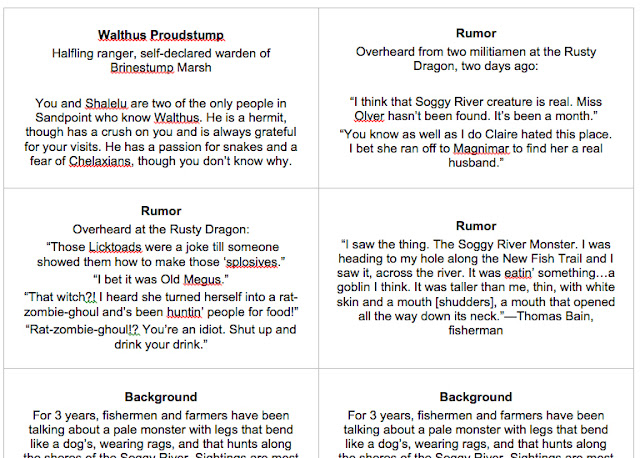 If you look carefully, you'll see one of the rumors above involves a relative of Harold Olver, the bully from the opening scene. His sister Claire may or may not have been a victim of the Soggy River Monster. I didn't directly say it was Harold's sister, I simply gave them the same last name and let the players figure it out. Antax's fear aura brings up horrors in Harold about his sister's fate, feeding his anxiety in a way he doesn't understand. So he's taking it out on Antax. While Paz sensed something was wrong, he had been gone for 3 months and his player didn't have the rumor about Claire. Antax, however, did. This set up an emotional moment of character growth for PC and NPC alike that paid off several games later when the PCs found Claire's engraved locket in the Monster's lair and returned it to Harold.

Note: The story with the Olvers isn't part of Jade Regent as written. They were created by me to add moral dilemma and dramatic tension, while helping to make the people of Sandpoint more than set-dressing. 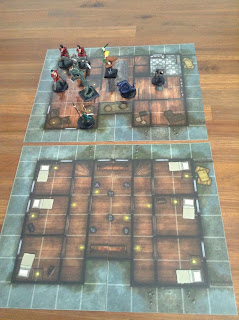 The Rusty Dragon Inn is owned by one of the focal NPCs in Jade Regent, Ameiko Kaijitsu. The inn is described as one of the largest in Sandpoint. Unfortunately, of all the maps I own, a moderate sized inn isn't one of them. I decided to go with the smaller, more intimate inn from Map Pack: Shops instead of the gigantic Waterfront Tavern. This gave the feeling of a small, family-owned business the PCs could care about. It made the opening conflict feel personal and not like a generic bar brawl. It also prevented me from having to populate the entire dining area with random NPCs.

The Dragon doesn't play a huge role in Jade Regent after the Brinewall Legacy, but if you're running Rise of the Runelords then the Tavern, Country Inn, Urban Tavern, Pub Crawl or upcoming Seedy Tavern maps may better fit your needs.

The fight scene between Harold and the PCs was run cinematically instead of round-by-round to keep the roleplaying flowing. When you ask for initiative, players tend to pull weapons and start killing things even when they're in a friend's bar with guards around. Keeping things cinematic while making sure everyone gets a chance to act lets the action flow smoothly and doesn't trigger your players into "kill the bad guys!" mode.

Next: Behind the Screen: Beasts of the Bog

* = While trying painfully to ignore the fact that it's all information they should know because they live in that world, and that Katara did a voice over during the credits not 3 minutes before explaining exactly the same thing so why is she asking now?!