Behind the Screen: The Final Confrontation

Putting together the layout for the players' conflict with the skeletal samurai was both relatively easy, and incredibly satisfying. It was the first time I had the chance to use many of the props I'd been prepping to give the players the tactile treasure experience I'd been looking for.

The Brinestump Caverns map was a simple cave system and the Cavern Tunnel Tiles packs from Christopher West werw perfect. As I've mentioned, I'm a big believer in putting the heart of a module's map on the table without getting caught up in the specifics; your players won't know the difference as long as the encounters are interesting and the layout keeps them focused on the action.

For the caverns, I needed a few key features: an entrance, a place for a giant spider to live, a large cavern and an alcove near the back of the complex. I also needed several water features. Outside of these core features, I was free to make the encounter as complex or simple as I needed to keep the action and tension high.

Tile packs like Christopher West's Cavern Tunnels and map packs from companies like Paizo have the advantage of simulating the "Fog of War" by allowing you to place only a few tiles at a time. This builds the mystery and saves time drawing out maps on a dry-erase mat. I layout the map I want to use before the game, take a photo with my phone or iPad, then stack the tiles in the general order I expect them to be laid. For larger maps, that last step may be difficult, but keeping yourself organized keeps the game moving and reduces downtime. 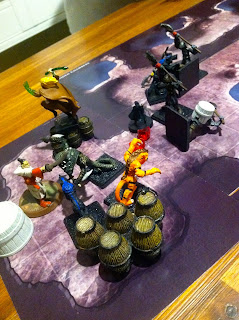 The skeletons in this combat are re-based skeletal warriors from the Mage Knight miniatures combat game and for the skeletal samurai I used a miniature from the Heroscape line. The barrels are random furniture bits I've picked up from other games, other gamers, or from the cast-off bins at my Friendly Local Game Store. 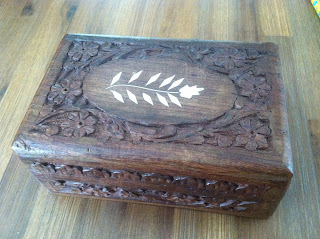 Of all the things in this adventure, what I'd been most looking forward to is finally springing a "real" Treasure Chest on my players. This wooden box represented the jade and rosewood chest the samurai was protecting. 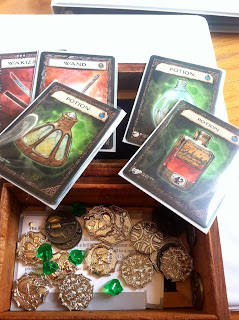 Inside the box were weapons, potions, coins, gems and several mundane texts (see my upcoming Mundane No More: Texts and Tomes supplement from Rogue Genius Games). I love the sense of discovery that comes from using physical objects in my games. There are many companies, including several Kickstarter projects, that are producing fantasy coins for use in RPGs and LARPs. The ones pictured here are called Campaign Coins and are available in the States from Paizo. I recommend getting the starter box set if you can find it. The coins are beautifully constructed, have a satisfying heft without being too bulky, come in copper, silver, gold and platinum, and each denomination has a specific theme of art.

The cards I use are a variety of Item Cards I've been collecting off-and-on for years, also available from Paizo. I have enough cards that I can decide which potion art represents which kinds of potions and stay consistent during the campaign. Once the group identifies a few potions of cure light wounds, they start to recognize them and don't need to make identify checks. For more on how I use item cards in my games, check out Behind the Screen: We Be Goblins, Part 2.

The 'gems' I use are plastic bits of various colors I picked up from the Crystal Caste booth at Comic Con one year. I don't tell the players how much each color is worth when the get them. They must negotiate with a vendor in town, succeed at Appraise checks, and spend time finding the right buyer to get the best price. I don't spend a huge amount of time on this in game, but the feel of a few minute conversation about selling or bartering gems for items is more satisfying than writing 50gp on a character sheet.

You don't need to drop a lot of cash to start introducing physical treasures into your game. Small glass beads or plastic chunks are cheap and can be found at any hobby store or online. Some people buy bulk boxes of washers of various sizes and colors to use as fantasy coins. You can even make your own item cards by using business card sheets and your own printer (see Rumors and In-Character Knowledge for what I use); you don't even need artwork, you can simply print a description of, say, a potion bottle on the front and the potion's game details on the back. Don't let your players look at the back until they succeed in identifying the items.

If you use any of these ideas in your games, feel free to share in the comments below, or let me know what fun and innovative tools you use in your own games!